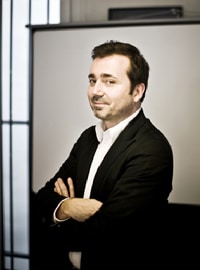 Founder and CEO of FaberNovel

After graduating from ESCP-EAP, Stéphane Distinguin joined Deloitte & Touche (1997), first in London within the High Technology group, then in Paris. In 1999, he co-funded Up&Up, an early stage...

After graduating from ESCP-EAP, Stéphane Distinguin joined Deloitte & Touche (1997), first in London within the High Technology group, then in Paris. In 1999, he co-funded Up&Up, an early stage venture capital firm. He so contributed to the development of start-ups focused on software edition or environmental technology issues.

In 2003, he funded faberNovel, a company dedicated to innovation and its implementation. In a range of 5 years faberNovel has employed 30 people and built solid references intervening as designer and developer of new concepts for products and services; growth and diversification by innovation strategies expert on behalf of industrial groups (RATP, SFR, Orange, L'Oréal, Gaz de France, La Lyonnaise des Eaux, JC Decaux...)

FaberNovel strengthened its position in the Silicon Valley in January 2007 when it created its American subsidiary faberNovel Inc. based in San Francisco, keeping a constant contact with the vanguard of ICT, design, and environmental technology.

Deeply involved in the French entrepreneurial ecosystem, Stéphane is president of Silicon Sentier: an association regrouping about 150 ICT start up. This association is developing two major projects for a more ubiquitous and connected Paris: 'le Quartier Numérique', a living lab in Paris 2nd district, and 'la Cantine', one of the first European co-working spaces.

He is also administrator of Cap Digital, the cluster for digital content; of Comité Richelieu, the French association for innovating SMEs and of Isoc France, the Internet Society French chapter.