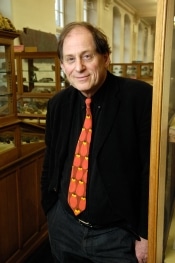 Scientist Salomon Kroonenberg, full Professor of Geology at the Department of Geotechnology, Delft University of Technology, is convinced that trying to curb our carbon footprint to influence our...

Scientist Salomon Kroonenberg, full Professor of Geology at the Department of Geotechnology, Delft University of Technology, is convinced that trying to curb our carbon footprint to influence our climate, like the Kyoto-protocol, is a waste of time and effort. He is in favour of saving energy, not to reduce the emission of carbon dioxide, but to preserve whatever fossil fuels we have left. He doubts whether human activity is to blame for the recent climate changes and the rise of the sea level. The climate changes by itself, which is caused by all kinds of natural variations. "In history, there have been periods with both less and more damaging greenhouse gasses in the atmosphere than at present. Humans had nothing to do with that." Kroonenberg claims we are short-sighted when we are addressing 'disturbing trends' like global warming, because we don't look beyond the year 2100. He rather looks ahead 10,000 years: "Then we are approaching the next ice age." His scientific criticism, summarised in his book 'The human measure: the Earth 10,000 years from now', has caused a lot of publicity.

Early 2007, he was asked frequently to comment on the fourth report of the Intergovernmental Panel on Climate Change (IPCC). Salomon Kroonenberg graduated in Physical Geography at the University of Amsterdam and obtained his Ph.D in 1976 at the same university on a dissertation entitled 'Amphibolite-facies and granulite-facies metamorphism in the Coeroeni-Lucie area, south western Surinam. 'He was employed at the Geological and Mining Service of Suriname from 1972-1978, at the University College of Swaziland from 1978-1979 and at the Centro Interamericano de Fotointerpretacion in Bogota, Colombia from 1979-1982. He was a full professor of geology and mineralogy at Wageningen Agricultural University from 1982-1996, after which he was appointed to his present position.

1. Climate change
2. Geology
3. Human impact on the environment and climate