Richard Koch is an author, entrepreneur and investor. He has written 20 books on ideas and business, including The 80/20 Principle, which has sold over 800,000 copies and been translated into 33 languages. His ventures have included Filofax, Belgo, Plymouth Gin, and Betfair, with returns on his ...

Richard Koch is an author, entrepreneur and investor. He has written 20 books on ideas and business, including The 80/20 Principle, which has sold over 800,000 copies and been translated into 33 languages. His ventures have included Filofax, Belgo, Plymouth Gin, and Betfair, with returns on his investments between 5 and 53 times his original stakes. He was educated at the University of Pennsylvania and Oxford University. He lives in Gibraltar and is a sun worshipper, with homes in three other sunny countries.

Richard Koch has actually had three careers, the first as a strategy consultant. He worked for the Boston Consulting Group in the days when Bruce Henderson was dominant and at his most creative. Koch became a partner of Bain & Company when it was a fledgling rival to BCG and was deeply influenced by Bill Bain as well as Henderson. Koch went on to co-found L.E.K. Consulting and regards that as the formative experience of his working life. “We were lucky with our timing,” he says, “and became the most successful new international strategy boutique of the 1980s. To recruit and mentor some of the brightest business stars of their generation straight from Oxford and Cambridge – people such as Damon Buffini and Tim Bunting – was the greatest pleasure of my career.”

Having put in 80 hours a week for 13 years as a strategy consultant, Richard retired before he was 40 and has since divided about half his time between two hobbies he finds delightful – helping to start or expand new ventures, and writing books on business ideas. He has started or provided early backing to Filofax, Belgo, Plymouth Gin, and Betfair, and made over £100m personally from these ventures. He is the author of "The 80/20 Principle" which has become a business classic and global bestseller, and 19 other books providing ideas for business. The other half of his time is spent enjoying life to the full. He believes that everyone and every business can achieve more by doing less, by combining extreme ambition with a relaxed and civilized daily life.

In these hard times, companies need to do more with less. Happily this is always possible. The trick is to truly understand the 80/20 Principle and to be ruthless in cutting out the trivia that swamps our working lives. Focus instead on your few super-productive customers, products, and activities. Cut out everything else. And make better use of your own time: almost certainly, a few things you do, including making tough decisions, add most of your value.

How to Start a Successful Venture – the Star Principle

There are all kinds of explanations as to why some new ventures succeed and others fail. But one answer dominates. It has little to do with the venture capitalist's mantra – the quality of the management. And nothing to do with the corporatist answer – the synergy with existing operations. The fact is that all really successful new ventures attain a leading market share in a fast growth market – the “stars”. Nearly all the value in the stock market comes from companies that are or have been star businesses. Using multiple examples from my own experience, I show why if you don’t have a star business the prospect of success is remote, and if you do, why it can usually be made to work.

1.   How to get more with less – the magic of the 80/20 Principle
2.   How to become a super-effective manager – the 80/20 Manager
3.   Two principles of leadership: Focus and Authenticity
4.   How to gain new insight – the strength of weak links
5.   How to start a successful venture – the Star Principle 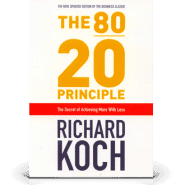