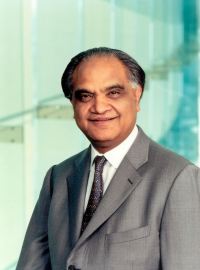 Ram Charan is a highly acclaimed business adviser, speaker and author. Ram has coached some of the worlds’ most successful CEOs. For 35 years, he has worked behind the scenes at companies like GE,...

Ram Charan is a highly acclaimed business adviser, speaker and author. Ram has coached some of the worlds’ most successful CEOs. For 35 years, he has worked behind the scenes at companies like GE, KLM, Bank of America, DuPont, Novartis, EMC, Novartis, 3M and Verizon.

Ram is known for his practical, real world perspective. His expertise runs deep in several areas of business:

Ram is a favorite among executive educators. He has taught for 30 consecutive years at GE's famous Crotonville Institute and is the recipient of their Bell Ringer award (best teacher). He won the Best Teacher Award at Wharton and Northwestern. He was among Business Week’s top ten resources for in-house executive development programs.

Ram is a well-known author, whose books include Execution, co-authored with Larry Bossidy, the former CEO of Honeywell. Execution reached number one on the Wall Street Journal list, and has been on the New York Time’s best-seller list for more than one hundred and fifty weeks. Ram's other books include Boards That Deliver, What the CEO Wants You to Know, Boards at Work, Every Business Is a Growth Business and Profitable Growth. His newest book, Know-How: The 8 Skills That Separate People Who Perform From Those Who Don’t, came out in January, 2007. He also tailors his books for specific client companies such as Gateway, Ford and EDS. He's written articles for the Harvard Business Review, Fortune, Time, Information Week, Leader to Leader, Director's Monthly, Directorship, The Corporate Board and USA Today.

Ram is a director of Austin Industries, The Six Sigma Academy and Tyco Electronics. He was elected a Distinguished Fellow of the National Academy of Human Resources in 2005. He serves as a co-host for the Fortune Forum on Corporate Governance and also serves on the National Association of Corporate Directors’ Blue Ribbon Commission on Corporate Governance. Ram is based in Dallas, Texas.

Know-How: The 8 Skills That Separate People Who Perform from Those Who Don?t

Execution - The Dicipline of Getting Things Done

Leaders at All Levels: Deepening Your Talent Pool to Solve the Succession Crisis