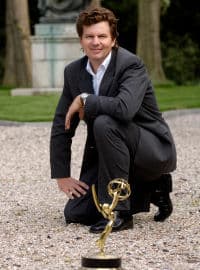 World traveller with a message

As a child his horizon was no wider than the fields around his house in a rural Dutch village. Now for over twenty years, Peter Tetteroo cruises the world for international TV-networks.

Peter Tetteroo was rewarded many times; his documentary 'Welcome to North Korea' deserved him an International Emmy in New York. He is driven by an untameable desire to share his experiences. He is an enthusiastic storyteller, but each tale raises just as many questions. His lectures frequently double the scheduled length while he takes his audience all over the world, explains the power of the media from the inside, but also addresses the thorniest topics in society, such as interracial issues, the taboo of suicide among the elderly, the truth about the so-called millennium goals, etc.

As a moderator at company meetings he is ruthless but honest. Getting to the heart of the issue is his second nature.

Last but not least Tetteroo brings with him an overwhelming experience in media-training.

It all started when Tetteroo –just finishing his apprenticeship in Dutch television- was sent on his first assignment abroad. That was November 7th, 1989, and the city of destination was… Berlin.

Two days after he arrived in the eastern part of the city, the Berlin Wall came down. Before he knew it, Tetteroo found himself at the centre of an historic event. That night, the 9th of November, he saw youngsters risking their lives, neglecting the feared Vopo's (border guards), climbing the wall and walking towards the West, towards liberty. Tetteroo walked with them, together with his cameraman. Instinctively, he did what he was assigned to do: report the event. After Berlin, one historic event followed the other. He notably witnessed regime changes in Romania, Russia, Yugoslavia Indonesia, and Iraq. He continues to travel the world: many countries in Africa, Afghanistan, Colombia, Brazil, et cetera, even undercover to North Korea.

"Travelling enriches me. Almost every day, essential questions about the crisis situations that people are faced with strike me when visiting other cultures. I raise those questions in my documentaries, but I also want to share my experiences eye to eye. Revealing the backgrounds behind international developments. Trying to comprehend what determines the course of peoples' lives in difficult circumstances. Sharing that with an audience is a strong motivation."