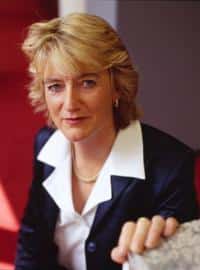 Maria Henneman was born in Haarlem and has always been a successful, internationally active journalist. She was editor-in-chief of 'Netwerk', one of the most popular news shows on Dutch public...

Maria Henneman was born in Haarlem and has always been a successful, internationally active journalist. She was editor-in-chief of 'Netwerk', one of the most popular news shows on Dutch public television. Before that she was an anchorwoman, reporter and editor of NOS Journaal (national news show) for many years.

Maria Henneman studied history. After her graduation she started her professional career as a spokeswoman for and an adviser to one of the Dutch labour unions.

She learned how to develop policies and to understand the communication business. Maria Henneman also came into contact with the media.She joined NOS Journaal in 1986. She was hired as an economics editor, later she became a political journalist. As of 1994, she reported on many national and international events as a traveling correspondent. After that she was an anchorwoman until 1998.

At the start of her career Maria Henneman was the editor of the 'Yearbook of Women's History' and member of the board of the Association of Journalists in The Hague. In 2000 she became a member of the consulting committee Future Government Communication (Committee Wallage). This broadly assembled State Commitee published a trendsetting report on the way the government has to adapt its communication strategies to the demands of civilians, companies and institutions.

She joined the working party Public Broadcasting News, which she chaired as of 2002. The working party coordinates the joined interests of all news shows on the public television channels. Maria Henneman was also member of the board of the Dutch Society of Editors-in-Chief (Genootschap van Hoofdredacteuren). She gave up both duties in 2004. At the same time she resigned as 'Netwerk's' editor-in-chief.

Maria Henneman is a professional, result-focussed, creative woman who develops many activities at the moment. She is a chair woman and an interviewer during conferences and events, she is a coach and consultant to journalists and other professionals and is available as an interim manager. She gives lectures about media and politics.

Maria Henneman is direct, her presentations are clear and transparent. She has knowledge about many issues. She is considered to be a passionate woman. She also is an independent thinker, but loyal and responsible towards her clients.