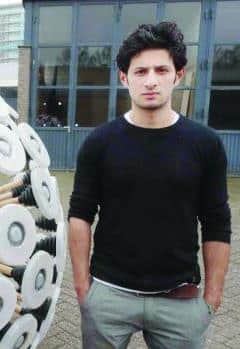 Director of Hassani Design B.V. and Co-Creator of the Mine Kafon

Mahmud Hassani was born in Mazar-i-Sharift (Afghanistan) in 1986, living the first years of his childhood in Kabul. 1989 signaled the departure of the Russian army and with it the change of power as ...

Mahmud Hassani was born in Mazar-i-Sharift (Afghanistan) in 1986, living the first years of his childhood in Kabul. 1989 signaled the departure of the Russian army and with it the change of power as the Mojahedin took over Kabul. Life became dangerous as the country was destabilized. The death of Mahmud’s father lead to his mother’s decision to flee Kabul and Afghanistan permanently

Through his year of travelling, he learnt a lot about the world, experiencing different cultures, languages and ways of thinking. This has helped him to form a unique perspective and ability to communicate with all kinds of people. Among other skills, Mahmud can speak five languages.

Growing up with his brother Massoud Hassani, he found his place as test subject for his inventions, not unlike Q and James Bond. Massoud would design something new, which would be tested on or by him, for better or worse. Surviving experiments such as new slingshot designs and rocks to the head, they have over the years become a strong team striving to achieve their dreams.

As a result and having graduated from a business and marketing degree, it is quite obviously that Mahmud founded and became the Director of Hassani Design B.V., in order to support the development of the Mine Kafon, his brother’s revolutionary invention.

Inspired from the wind powered toys, they were used to play with in Kabul, Mine Kafon is a wind-powered device, built by hand, heavy enough to trip land mines as it rolls across the ground. The Mine Kafon is approximately the height of a man. The designed weight is enough pressure to trigger a landmine, mimicking the footstep of a human being. With each detonation the Mine Kafon loses just one or two legs so it could potentially destroy three or four landmines in one journey. The total cost of one is about $60 USD. It is faster, safer and up to 120 times cheaper than the traditional techniques.

In countries with war-ravaged pasts, concealed landmines pose a silent, hidden threat. Lurking underground for years, they risk throwing open fresh wounds in communities which are just beginning to heal. Using Mine Kafon we can get rid of landmines very quickly. Even if it hits only 1% of the landmines worldwide, then we are still talking about millions of landmines. In this way we can also save billions of dollars and invest that money in affected countries, to build schools, hospitals, agriculture and industry. The Mine Kafon project could help to rebuild economies and give the inhabitants hope and a bright future without fear.

Besides raising the awareness about landmines issues among the general public, university professors and the media, Mahmud Hassani have also achieved, through Kickstarter, to receive the support of over 4000 people and raised a goal of 100,000 pounds in order to take the Mine Kafon to the next step further.