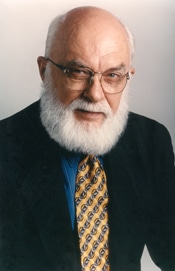 James Randi (stage name The Amazing Randi) is a stage magician and scientific sceptic best known as a challenger of paranormal claims and pseudoscience. He claims to be an investigator on paranormal, scepticism, and the history of magic.Among his publications are The Truth About Uri Geller, where ...

James Randi (stage name The Amazing Randi) is a stage magician and scientific sceptic best known as a challenger of paranormal claims and pseudoscience. He claims to be an investigator on paranormal, scepticism, and the history of magic.

Among his publications are The Truth About Uri Geller, where he unmasks the Uri Geller myth, Flim-Flam, where he explains supernatural claims that have impressed the thinking of the public and The Faith Healers, where he attended “miracle services” which actually were rife with deception, chicanery and often outright fraud.

Mr. Randi was host of The Randi Show on WOR-Radio, New York City (1966/67) and has had his own TV Specials in Australia, Belgium, Canada, England, Hungary, Italy, Japan, South Korea, and the USA. He has appeared in a great many TV documentaries, shows around the world and even had his own world tour. In 1974 he performed by special request at the White House.

He spends much of his time travelling between performances and lectures all over the globe. A Granada TV series, James Randi: Psychic Investigator was shown in the UK in 1991. It dealt with testing of individuals who claim to have paranormal, supernatural or occult powers of various kinds. In 2003, a 14-episode TV series by Seoul Broadcasting Corp. with Mr. Randi as the host, was shown in South Korea offering his million-dollar prize, for the person who could prove to have paranormal powers.

He was a founding fellow of the Committee for the Scientific Investigation of Claims of the Paranormal (CSICOP) based in Buffalo, NY. This organization of academics and other experts is devoted to the examination of paranormal, occult and supernatural claims. Nonprofit, it serves the media, other scientific groups, and the public as an information source. Their journal is the Skeptical Inquirer, which reaches 40,000 subscribers. Mr. Randi also writes a column, “'Twas Brillig,” for The Skeptic, the journal of the Skeptic's Society, headquartered in California.

He is editor of SWIFT, his own online newsletter which was set up in 1996 in Fort Lauderdale, Florida, as a data source for educators, students, media, and researchers. The SWIFT web page receives thousands of hits a day from all over the world. The Foundation offers prizes and scholarships to students, conducts seminars and workshops, and also funds and originates selected, original parapsychological research.

He has written articles and definitions for Encyclopedia Americana, Compton's Encyclopedia and the Encyclopaedia Britannica Medical & Health Annual. His articles are frequently picked up and translated for use in foreign popular and scientific periodicals. James Randi has spoken for numerous schools, colleges, universities, and prominent organizations internationally, among them: Goddard Space Flight Center, Harvard University, NASA, Chinese Institute of Scientific & Technical Information, Academy of Berlin and University of Oslo.

The Truth About Uri Geller