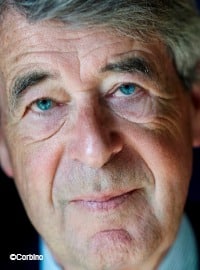 For years prof. dr. Jaap van Duijn was the face of Robeco, the company he worked for from 1983 until his retirement in 2005. Van Duijn studied general economics at the Dutch Economic University...

For years prof. dr. Jaap van Duijn was the face of Robeco, the company he worked for from 1983 until his retirement in 2005. Van Duijn studied general economics at the Dutch Economic University Rotterdam, where he graduated cum laude in 1968, and at the University of Illinois in Urbana-Champaign (graduation in 1972). From 1972 until 1983 he was a scientific assistant, lector and professor at the Interfaculty Business Administration in Delft, the Netherlands. In 1979 and 1980 he was appointed guest professor at the McMaster University in Hamilton, Ontario, the University of Illinois and the Simon Fraser University in Burnaby, British-Columbia, Canada. Between 1981 and 1983 Van Duijn was crown member of the Social Economic Board, SER. He became a member of the Committee of Economic Experts of the SER in 1983. That year he joined the management of the Robeco Group, where he was in charge of research and institutional capital management. From 1988 until 2003 Jaap van Duijn was Robeco's Chief Investment Officer and, from 1995, fund manager of Holland's oldest and largest investment trust. At the age of 60 van Duijn retired from Robeco's Board of Directors, but he stayed as Chief Strategist until his official retirement in October 2005. At that occasion he got a Dutch royal decoration. During his years with Robeco professor van Duijn has taught practical aspects of the investment theory at the University of Amsterdam and the Erasmus University of Rotterdam.

Van Duijn has written many articles and books on economy and investments. His last book, 'De groei voorbij – over de economische toekomst van Nederland na de booming nineties’ ('Beyond growth - the economic future of the Netherlands after the booming nineties', De Bezige Bij, March 2007), was an instant success. He was a columnist for national newspaper NRC Handelsblad (1982-1985), national newspaper Algemeen Dagblad (1993-1996) and SAFE (1985-2005). Since October 2005 he is a columnist for the Saturday edition of the Financiële Telegraaf.

In his spare time Jaap van Duijn, the son of a market gardener, a passionate gardener himself. He ran marathons and skated the famous Elfstedentocht (Eleven cities race) in the Dutch province of Friesland. However, his real passion is cycle racing especially in high mountain areas.