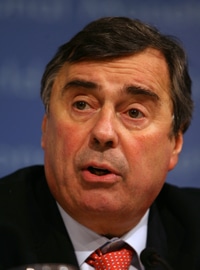 Francois Bourguignon, a global authority on the economics of growth and development, played a vital role in placing economic growth and its relationship with inequality and income distribution and poverty at the centre of the World Bank’s agenda.

Born on May 22, 1945, François Bourguignon, a French national, studied at the Ecole Nationale de la Statistique et de l'Analyse Economique (ENSAE) and the University of Paris VI, where he earned a post-graduate degree in Applied Mathematics (1973). He went on to earn a Ph.D. and the Merrit Brown Award for the best thesis at the University of Western Ontario, Canada (1975), and a Doctorate in Economics at the University of Orleans (1979).

François Bourguignon is a specialist in the economics of development, public policy, income distribution and inequality. Prior to his current appointment, he held the position of Senior Vice President for Development Economics and Chief Economist at the World bank from 2003 to 2007, where he provided intellectual leadership and direction to the Banks' overall development strategy and economic research agenda, at global, regional and country levels.

Along his present duties as a researcher, professor and manager of a leading institution, François Bourguignon kept being active in the international development community by lecturing and writing reports for international agencies. Ever since his appointment in the World Bank and, in effect long before it, François Bourguignon had extensive practical experience as an advisor to international agencies and policy makers in developed and developing countries. In particular, he has been an advisor to many developing countries, the OECD, United Nations, European Commission, and was a member of the Council of Economic Advisors to the French Prime Minister from 1997 to 2002, a position he was recently re-appointed to.

Since 1985, he has been Professor of Economics at the Ecole des Hautes Etudes en Sciences Sociales in Paris. He has been on leave from that institution between 2003 and 2007. There, he co-founded and directed the 'Département et Laboratoire d'Economie Théorique et Appliquée (DELTA)', a research unit in theoretical and applied economics, which turned out to be the cornerstone of the recently created Paris School of Economics. He has also held academic positions at the University of Chile, University of Toronto, University of Geneva and Bocconi University.

He is a Fellow of the Econometric Society, and was president of the European Economic Association for Population Economics. He received the silver medal for academic achievements from the French National Centre for Scientific Research in 1999. He received honorary degrees from the Universities of Quebec, Western Ontario and Geneva. He has authored or edited several books and over one hundred articles in leading journals, including the 'American Economic Review', 'Econometrica', 'Review of Economic Studies', 'Journal of Political Economy', 'Journal of Economic Theory', and 'Journal for Development Economics'.

The impact of macroeconomic policies on poverty and income distribution

The Impact of Economic Policies on Poverty and Income Distribution