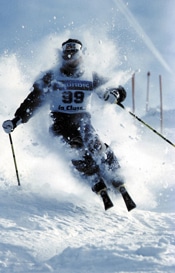 Edgar Grospiron is born in Lelex in the Jura Mountains in 1969, he made his first steps in skiing at only 18 months, and then he moved to the Alps in 1973 (then Morzine Avoriaz) before settling in...

Edgar Grospiron is born in Lelex in the Jura Mountains in 1969, he made his first steps in skiing at only 18 months, and then he moved to the Alps in 1973 (then Morzine Avoriaz) before settling in Annecy-le-Vieux in 1978. In 1982 he got his first team selections in France freestyle skiing with a first podium in World Cup March 23, 1987 in La Clusaz.

During the 1988 Winter Olympics in Calgary, Edgar Grospiron took the bronze medal. The following year the World Championships 1989, he became world champion in moguls skiing, and he retains his title at the 1991 edition. He was therefore a favourite at the 1992 Winter Olympics in Albertville where skiing is for the first time recognized as an Olympic sport, with more than 20 000 spectators, and achieved the gold medal.

After this success, he continues his career, despite a failure of the 1993 World Championships with an 36th place, he achieved a new Olympic medal at the 1994 Olympics in Lillehammer, it was bronze as he sought gold.

After putting an end to his sporting career, he became a management consultant and commenter on ski events for different media; on the other hand he is also involved in the émision radio RMC Dream Team and continues to collaborate with the company Salomon. Finally, he does not hesitate to return to the France team ski freestyle where he continues to provide advice, and of course share his experience.

Edgar Grospiron delivers presentations and workshops on teambuilding and motivation, with impressive footage and photo’s from his skiing career.