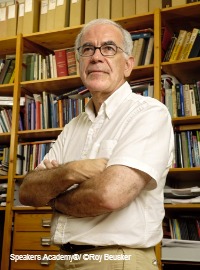 Prof. Dick Swaab became world famous for his work on sex differences in the brain. When he discovered the first difference in the brains of gay men, his research even became controversial,

Prof. Dick Swaab became world famous for his work on sex differences in the brain. When he discovered the first difference in the brains of gay men, his research even became controversial, but afterwards critics had to admit they had been wrong. That discovery was only a small part of the core of the research: the fact that already in the womb much is recorded in our brains, our character, our abilities and limitations and our predisposition to brain diseases.

Dick Swaab is an international working brain researcher, leading a team at the Netherlands Brain Institute in Amsterdam and a team in China. He was professor of neurobiology at the University of Amsterdam and director of the Netherlands Institute for Brain Research for 30 years. He writes for a wide range of newspapers and magazines: from Nature to NRC Handelsblad. For his research and publications, totaling about a thousand titles, Dick Swaab received numerous awards. In 1995, for example, his article in Nature on transsexuality was selected as 1 of the 100 best articles of that year.

His scientific fame brought him several visiting professorships, including that of Emil Kraepelin Professor at the prestigious Max Planck Institute for Psychiatry in Munich, as well as Chao Kuang Piu, Chair Professor at Zhejiang Univ., Hangzhou, China. Swaab also published the bestseller: 'We are our Brain' (Uitg. Atlas-Contact, 2010, 450,000 exempl. sold), which has now been translated into 12 languages. A children's version of this book (You Are Your Brain) was published in 2013 and translated into Russian. A lecture by Prof. Dr. Swaab is always a highly erudite and extremely entertaining journey into a box that is not nearly as black afterward.

Which topisc are Dick Swaab’s most captivating ones?

Dick Swaab is a scientist, mainly focused on the mysteries of the human brain. Thus, Dick Swaab understands very well how to break down the human psyche, pair it with the neurobiology behind it and make the audience not only understand it, but leaves them pondering about their very own mind.

Can I book Dick Swaab for a webinar?