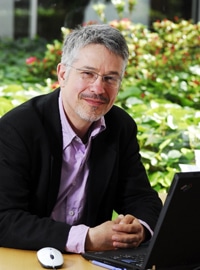 Create an entrepreneurial spirit in your organisation

Prof. dr. Fayolle is a professor at the EM Lyon Business school and is an acclaimed European expert on entrepreneurship and strategic management for entrepreneurial organizations. He is a professor in these fields for over 15 years and had a broad experience in the academic and private world. He is ...

Prof. dr. Fayolle is a professor at the EM Lyon Business school and is an acclaimed European expert on entrepreneurship and strategic management for entrepreneurial organizations. He is a professor in these fields for over 15 years and had a broad experience in the academic and private world. He is the (co-)author of 15 books and more than 80 articles published in French and international scientific journals. Among the positions he held, he was the French expert in the services of the European Commission, appointed by the Ministry of Economy, Finances and Industry, to participate in a project evaluating educational practices and entrepreneurial education. In 2009, he was an expert on entrepreneurship education in Germany for OECD.

In 1981 he received his Master in Technology from the CESI in Lyon. In 1989 he received his Master in Management from the University Jean Moulin in Lyon. Later on, in 1992 he got his degree of European Engineer and a Master in Management Research. Finally he got, in 1996, a PhD in management sciences from the University of Lyon. Since 1991 he is active in teaching at Universities and research centres. During his professorship he planned and taught a large number of courses and seminars, both to undergraduate students, graduate students and to specialized target groups in the form of Executive Education.

Since 1998 professor Fayolle is doing research on entrepreneurship education both in France and in Europe, where he is providing information about operators, policies and programmes, allocated resources, pedagogic approaches and the effects on the socio-economic level. Other strong interest in research is corporate entrepreneurship. On this topic, professor Fayolle is studying the influences of three levels of culture (national, industry and corporate) on the firms’ entrepreneurial orientations and behaviours. He is also interested in understanding the mechanisms and organizational processes by which firms can create an entrepreneurial spirit among their employees and managers.

During his career he held and actually holds many positions as a member, editor or chairman at several French and International journals. He also took part at many committees and associations, like the Académie de l'Entrepreneuriat (French association of teachers and researchers in entrepreneurship), where he has been the Chairman from 2003 to 2006. Professor Fayolle is also very involved at the European level where he founded in 2002 an academic network focusing on the specificities of European entrepreneurship research.