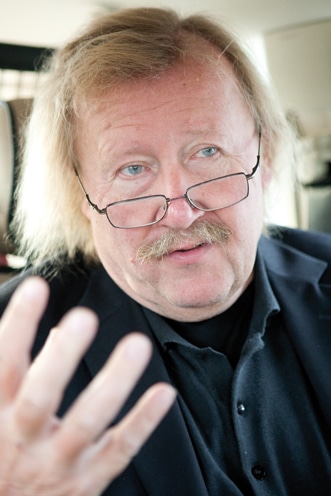 Peter Sloterdijk is a German philosopher and a professor of philosophy and media theory at the University of Art and Design Karlsruhe.

Sloterdijk studied philosophy, German studies and history at the University of Munich. In 1975 he received his Ph.D. from the University of Hamburg. Since 1980 he has published a number of philosophical works acclaimed in Germany, including the Critique of Cynical Reason. In 2001 he was named chancellor of the University of Art and Design Karlsruhe, part of the Center for Art and Media Karlsruhe. In 2002 he began a stint as co-host of 'Im Glashaus: Das Philosophische Quartett' ("In the Glass House: The Philosophical Quartet"), a show on the German ZDF television channel devoted to discussing key contemporary issues in-depth.

Sloterdijk's philosophy strikes a balance between the firm academicism of a scholarly professor and a certain sense of anti-academicism (witness his ongoing interest in the ideas of Osho, of whom he became a disciple in the late seventies). Notwithstanding the criticism that some of his thoughts have provoked, he refuses to be labeled a 'polemic thinker', describing himself instead as 'hyperbolic'. His ideas reject the existence of dualisms—body and soul, subject and object, culture and nature, etc.—since their interactions, 'spaces of coexistence', and common technological advancement create a hybrid reality. Sloterdijk's ideas are sometimes referred to as posthumanism, and seek to integrate different components that have been, in his opinion, erroneously considered detached from each other. Consequently, he proposes the creation of an 'ontological constitution' that would incorporate all beings—humans, animals, plants, and machines.

The Kritik der zynischen Vernunft, published by Suhrkamp in 1983 (and in English as Critique of Cynical Reason, 1988), became the best-selling work on philosophy in the German language since the Second World War and launched Sloterdijk's career as an author.

The trilogy Spheres is the philosopher's magnum opus. The first volume was published in 1998, the second in 1999, and the last in 2004.

Spheres is about 'spaces of coexistence', spaces commonly overlooked or taken for granted that conceal information crucial to developing an understanding of the human. The exploration of these spheres begins with the basic difference between mammals and other animals: the biological and utopian comfort of the mother's womb, which humans try to recreate through science, ideology, and religion. From these microspheres (ontological relations such as fetus-placenta) to macrospheres (macro-uteri such as nations or states), Sloterdijk analyzes spheres where humans try but fail to dwell and traces a connection between vital crisis (e.g., emptiness and narcissistic detachment) and crises created when a sphere shatters.

Sloterdijk also argues that the current concept of globalization lacks historical perspective. In his view it is merely the third wave in a process of overcoming distances (the first wave being the metaphysical globalization of the Greek cosmology and the second the nautical globalization of the 15th century). The difference for Sloterdijk is that, while the second wave created cosmopolitanism, the third is creating a global provincialism. Sloterdijk's sketch of a philosophical history of globalization can be found in Im Weltinnenraum des Kapitals (2005), subtitled 'Die letzte Kugel' ('The final sphere').